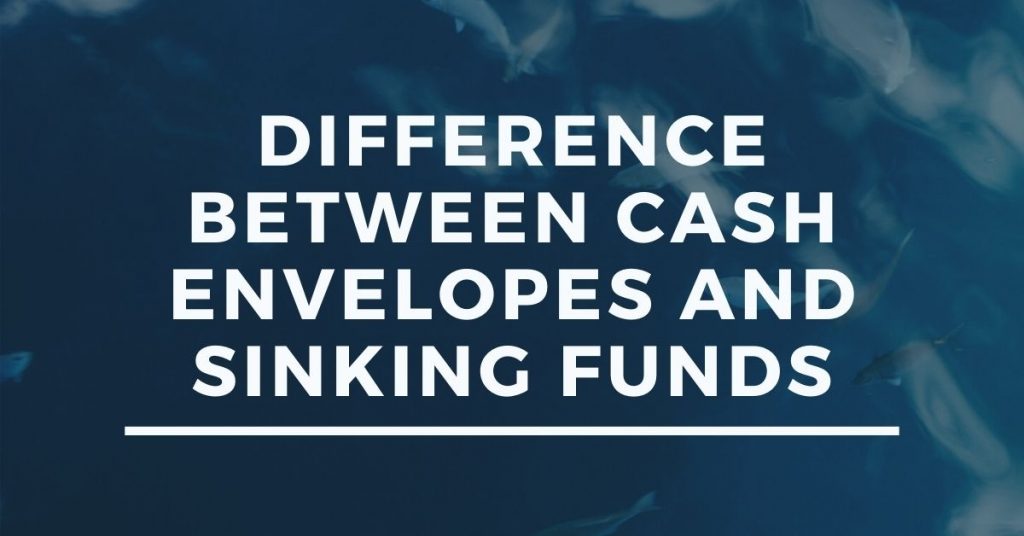 Budgeting is hard. Everybody wants money, nobody wants to go through the pain of saving it. Sticking to a budget is like sticking to a daily routine made by your gym instructor. It straight up sucks. But following said routine would definitely get you into shape, just like a budget could sort you out financially. Put into the equation the myriad of plans that help you sort your finances out, and you can pretty much guess the headaches these plans will give you. Like what is a sinking fund? And is it similar to what a cash envelope is? Let’s take a look at the difference between cash envelopes and sinking funds,

It’s kind of funny how some things are named for irony. Suzuki Swift, sinking funds. Sounds like it will sink your money, right? No. Turns out, it’s just the name of a saving technique. Quite useful, too. A quick search on Google and elsewhere will pull up a ton of blogs and videos on how sinking funds saved families from crushing levels of debts or got them to save for their favorite car or vacation destination. So, you might be tempted to ask, what are sinking funds? How do they work? And how are they different from cash envelopes?

What is a Sinking Fund?

Unlike the name would suggest, no, the money you put in it will not sink. It will, however, enable you to acquire greater financial flexibility and maneuverability and can actually help you save money towards a goal i.e. (paying off your credit card debt, saving for a new car etc.). So, like every other saving technique, how does a sinking fund work?

Well, it starts by you saving money. Basically, like every other budgeting method. But this is different in the matter that you put aside money

Much like a swear jar, or any other jar for that matter, a sinking fund is basically a fixed amount that you put aside from your paycheck every once in a fixed duration for an expenditure (in the future). Basically, it’s like a swear jar for your new phone. What you do is, you earmark a certain amount of money from your income (be it a pay check or any other source) and deposit it in that jar every week or month to get to a specific amount that will be used to pay off debts or fund new purchases.

A sinking fund is more popular as it has been used as a viable method of saving money for decades by countries and corporations alike. The method, however, remains the same in both cases: be it a normal household budget or a multi-faceted, trillion-dollar budget, a sinking fund requires the surplus to be earmarked for a certain purpose and then kept aside and supplemented over time. When the jar or the account reaches the specified limit, it is then used for said purpose. It’s really as simple as that. Except for maybe working out how much amount needs to be saved.

You see, a sinking fund is not supposed to have whatever pocket change is left by the end of the week or the month. A fixed amount goes in it, be it a dollar or a thousand bucks. How it goes is, suppose your car insurance is $2100, which you want to pay off in a year. Utilizing a sinking fund, you simply divide $2100 by 12 months, and figure you would need to save 175 bucks a month to cover your insurance in a year. Therefore, your sinking fund would require exactly $175 a month to get to that point. Once you’ve managed to edit your budget around your sinking fund, you’re all set to save and enjoy.

Also Read: How Much Savings Should be Invested?

What is a Cash Envelope?

As the name would suggest. A cash envelope is simply, money in an envelope. Too simple? Ok, here’s what it is.

See, the world has progressed past the need for cash and carrying cash. But it hasn’t gone far in completely phasing out cash for cards. In fact, there’s still a pretty good reason for using cash for transactions (where possible) instead of cards. And that reason is called the physical aspect of cash-based transactions. What it means is, if you use a debit/ credit card, you can’t see what you are spending and what is your limit. A debit card will tell you how much you spent and maybe even tell you how much is left, but it won’t convey the sense of ‘physically acknowledging the amount you’ve spent and the amount that is left’.

Cash envelopes do this by removing the sensory deprivation associated with using cards. Say, your grocery trips amount to 250 bucks. Instead of paying them off using a debit card, you work out the essentials and then buy the groceries using the ‘essential’ amount in the envelope. Once at the counter, when you take out the cash to pay, then you can get a good feel of what you are spending on your groceries by the visual input of how much money is left in the envelope.

This was expertly explained in a blog post, which stated that the writer never actually felt the ‘gravity of the amount’ she was spending on groceries alone. But once she undertook the cash envelope method, she was hit by the visual impact that the unnecessary purchases made on her earnings, by revealing that all she had left in her envelope was 5 dollars, wherein the ‘grocery money’ had to last her two weeks. The same purchases done by a debit card would’ve made no such impact on me regarding how much I could save by cutting back on stuff we buy just for the sake of it, she concluded in her blog post.

Needless to say, a good saving strategy or plan would include some form of a cutback on unnecessary purchases, and the cash envelope method certainly does provide visual feedback on the matter in such a profound way that can compel even the worst of impulsive shoppers into saving a bunch of money just by cutting back on a destructive habit. It is considered pretty effective when it comes to saving money.

What’s the difference between cash envelopes and sinking funds?

Both are in the same leagues of budgeting strategies. Both help struggling families and flailing corporations get out of the torrential waters. However, there are differences between these two, enough differences for them to not be deemed interchangeable.

First up are savings, the one point of budgeting. Sinking funds are definitely savings, as evident by their name. They are goal-oriented savings and end up in a fund substantial enough to cover a major purchase or transaction. A cash envelope, on the other hand, is considered a mean, not an end. Whereas most funds end in themselves (that is, they eventually result in a coffer full of money), a cash envelope is simply a means, a method of saving money. It necessarily does not end up in an account full of money ready to be spent on a gadget or loan. It is simply a device used to achieve a result. Sinking funds are savings that you actively skim off money for (from your own paycheck, of course) while a cash envelope is a method to get the desired result of savings. Cash envelope passively helps you save money.

The second difference would pertain to the end itself and how the end is attached to a goal. In other words, all budgeting techniques aim at money being saved, but with sinking funds, it gets a bit different. For a fund to be classified as a sinking fund, an eventual goal and the expenditure needs to be identified before initiating the fund itself. With other plans and cash envelopes, there’s no such restriction or any conditions. With every other method, the aim is just to save simply for a rainy day or any other factor. A sinking fund, on the other hand, as a rule of thumb, is used for a goal that requires a big chunk of money and takes time: like paying for a new car or paying off loans.

While these concepts are eventually similar, the differences certainly don’t stop here.  When using the cash envelope method, one is simply withdrawing physical cash from the bank, putting it in an envelope and using it for purchases that fall under a specific category. These are usually short-term purchases that will often occur within each ‘pay period’. For instance, people use a food cash envelope because they go grocery shopping on a weekly basis so it would make sense to take the cash out and fill up the food envelope with each paycheck.

Starting a sinking fund for food wouldn’t make much sense because you would be saving money and possibly transferring it to a separate account only to withdraw it each time you went to purchase food.

Read More: How Much to Budget for Food?

Zen Nutrients launches Onco-V, the most comprehensive natural immune and respiratory booster in the...