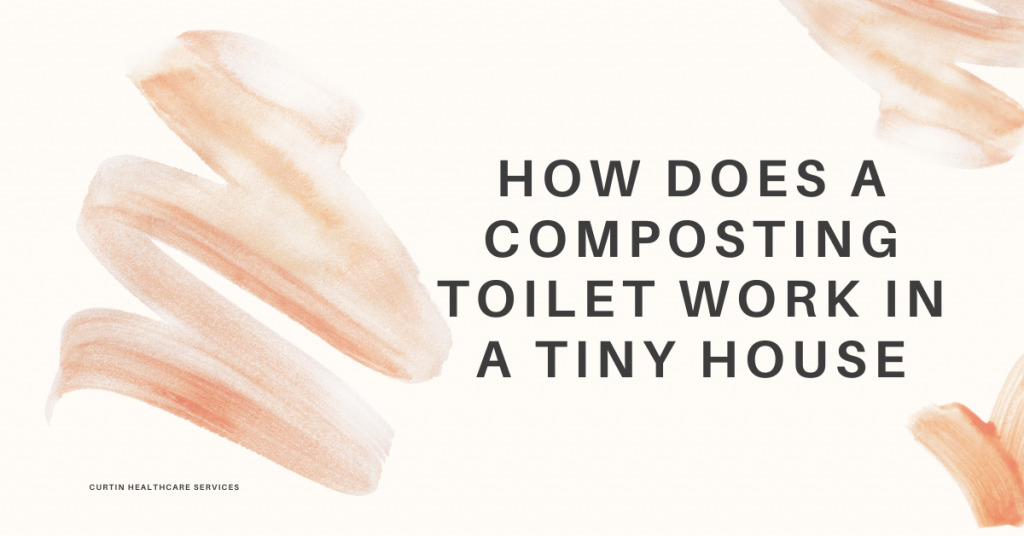 There’s a good chance that a majority of people have no clue what is a composting toilet. A compost is a pretty common term, but a composting toilet? Sounds like a smelly mix of two words (if compost wasn’t already smelly enough). But as the world leans more towards embracing nature and giving back to the planet, such measures are here to stay. A composting toilet, therefore, is exactly what it sounds like. A dry, toilet that uses natural processes to decompose and break down human excrement/ waste (usually) for agricultural purposes. However, it’s application and usage is limited to places with obvious disadvantages to a regular sewage system. However, can it work in a tiny house? If so, how does a composting toilet work in a tiny house?

But first things first. Why would anybody use such a thing? Water is already a pretty good agent of disposal, so why would anybody want to cut it out of the equation, especially if the equation deals with something as hazardous and odorous as human waste? Well, it all boils down to two reasons,

However, the latter part is mostly considered discontinued, since it has too many hazards associated with it. Now, onto the point,

What are Composting Toilets?

Composting toilets are ‘dry toilets’ that, instead of water and sewage-treating chemicals, utilize anaerobic processes of decomposition (through various bacterium and fungi) to naturally dispose off the human excrement. They have been in use for long now, starting from Europe in the middle ages (when water-based sanitation wasn’t a concept) to now being reduced to rural areas in third-world countries. Even there, it is used primarily as an agricultural process, wherein human-waste compost is used as a fertilizer. Its use has been greatly diminished owing to its unsanitary nature and the fact that it is essentially a cesspool of diseases.

Also Read: How Does A Water Source Heat Pump Work

What are its uses?

Aside from its very limited use as a fertilizer, these toilets are especially prevalent in countries where environment-friendliness is a big thing. Europe (Germany in particular) has a sizeable part of the population that uses such sanitation setups to reduce dependence on chemical treatment plants. Similarly, the Scandinavian states are also big on this trend. In America, these systems are utilized mainly in off-the-grid residential setups or areas where water-based sanitation isn’t possible (for some reason). Similarly, a small ratio of Americans also use these as a way to avoid the chemical treatment plants that are used to properly dispose off sewage. However, they come with their fair share of pros and cons, which are listed below,

There are several risks (medical) associated with such waste-disposal methods, considering that without water, the waste is exposed to the air and to other people, allowing for pathogens to wreak havoc in the area. Therefore, proper disposal methods should be used to ensure that the compost stays under the dirt and is not exposed to the open air.

As for the agricultural part, dry toilets are used in certain rural areas in developing countries. However, this practice has also been outlawed by a majority of governments worldwide to ensure that fecal-to-oral transmission of diseases can be avoided altogether. Therefore, a composting toilet’s ‘composting’ feature is usually not allowed within majority of communities and settlements.

How does a Composting Toilet Work in a Tiny Home?

For off-the-grid, tiny homes, composting toilets are the norm since they don’t rely on the sewage mainframe and offer composting solutions for agriculture. The primary use, still, pertains to the non-usage of water and sewage-treating chemicals and an absence from the network of sewage treatment plants and pipelines.

Usage is pretty simple for a tiny home. A desolate section of the land can be used to install the setup. This is so that smells and the whole composting process can be done out of sight. After that, its simply a matter of installing and giving it a go.

Modern systems are extremely popular among tiny house dwellers and off-grid living situations. These are made up of two different chambers.

The front chamber is fitted with a urine bottle, the back-chamber is for solids only. This means that urine and fecal matters are kept separately, making the decomposition process a lot less smelly. The urine bottle should be emptied every day really, but this depends upon how well used it is and how tiny your home is (because there will be odor). The back chamber is fitted with a mixing handle, which will mix bulking material in with your waste, thus breaking it down easier.

The simplest form of composting toilets is a one-chamber situation much like the “hole-in-the-ground”, only instead of squatting over a hole, you’ll have the modern comforts of an actual toilet seat. The difference is, instead of your waste flushing down into a sewage system, it is directly deposited into a bucket, bag or box. To mask any odour, a generous helping of sawdust or any carbon-based material can be sprinkled on top of the waste to do away with the smell.

Composting toilets with a good build quality are actually better when it comes to odor dispersal, because they are usually odorless. Such toilets usually have fans that work to suck out any odor that would be emitted from the setup. The toilets usually work by separating liquid and solid waste.

The solid waste will go into a chamber that will be mixed with peat moss or any other carbon-based alternative in order to help break the waste down. If you are staying somewhere where composting is not allowed, you will bag the solid waste in a biodegradable plastic bag and throw it away–much like a baby’s diaper is thrown away. Otherwise, you will be able to use the solid waste as compost. The liquid waste will be stored in a tank that will need to be disposed when it’s full. You can dispose the liquid waste in toilets, RV dump stations, or the ground if you are in a remote place where that is allowed. You will have to dispose off waste every 3-7 days for liquids and every 2-4 weeks for solid excrement.

Zen Nutrients launches Onco-V, the most comprehensive natural immune and respiratory booster in the...